PARADISE IN THE KERALAN BACKWATERS : OUR FAMILY MONSOON ODYSSEY 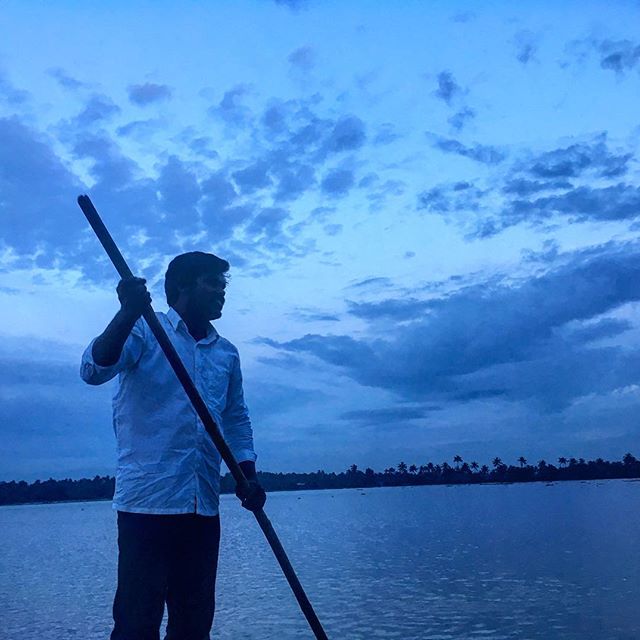 The tropical state of Kerala on the Malabar Coast is pretty much fabulously warm all year round (unless you’re high up in the misty tea plantations), but the monsoon season between June and August can bring its fair share of rain. Nothing should deter us Travel Lovers, however, as this spectacularly lush region of India becomes even more emerald green with every drop.

Last June, my son and I took a three week monsoon trip across southern Kerala. Despite not being a fan of in the rain (an understatement – I’m British and over it), those random rain showers on sunny days and dramatic storms at night made for an even more rewarding experience of ‘God’s Own Country.’ There is something deeply relaxing about being on holiday in the rain. For a start, it removes any obligation at all to go sightseeing – a sort of holiday from your own holiday.

In Kerala, if you’re out on a village stroll and the heavens open, you can take shelter under a giant palm leaf with a few cheerfully resigned locals for company. (Those tropical leaves can be enormous!) If you’re out and about in the city, you can just dive into the nearest café for a guilt-free slab of chocolate cake – and if you’re already ‘in situ’ in your hotel room, a rain shower provides unequivocal permission to do nothing except order room service and curl up with a good book.

We visited many hotels and destinations during those three rain scattered weeks of our holiday (and ate a LOT of chocolate cake) – but the undoubtable highlight was discovering a little piece of paradise on the Keralan backwaters called ‘Kayal.’

We arrived there straight from a highly disappointing stay (another understatement)aboard a traditional Kettuvallam houseboat on the backwaters of Lake Vembanad. I had looked forward to this stunningly scenic part of this trip, imagining the ‘quiet season’ to be exactly that. However, after passing hundreds of tourist boats identical to ours it wasn’t long before we started to actually recognise other passengers. Seeing them hanging off the bow taking endless photos of locals, who were simply doing their laundry or preparing fish for supper in their own gardens, made our boat trip feel like a bizarre Disneyland attraction – and horribly intrusive.

So in comparison, our ensuing stay at Kayal Island Retreat was a literal breath of fresh air. An opportunity to experience the backwaters in the most authentic and low impactful way possible. Tucked away like a secret on a private island, deep in the heart of the glittering backwaters, Kayal is a chic and unassuming little four-bedroomed boutique retreat. It is also a welcome source of employment for the residents of the tiny island of Kakkathuruthu, all of whom descend from small fishing communities that stretch back untold generations.

The only access to and from the island is local style in a big old wooden canoe – and by far the coolest way to get around, according to my eleven year old son. In fact we made it a point to take a boat trip once or even twice a day, and usually with no other purpose than to drift peacefully through clusters of pink water hyacinths surrounded by islets of palm trees. Not once did we fail to get a friendly wave from a fisherman casting his net for crabs and karimeen fish, or from someone pottering about in their lakeside garden. It was hard to believe we were barely half an hour from the busy mainland city of Cochin, home to over twenty thousand people and the main port of arrival for tourists to Kerala.

The owner and design-architect of Kayal is Maneesha Panicker – a homegrown Keralan who had set off many years ago to work abroad in exciting cities such as New York and yet, despite being internationally city-savvy, had realised where true quality of life could be found. Right back home where she began. An unassuming and charming host, Maneesha plays an important part in the Kayal experience and breathes tremendous warmth, as well as professional expertise, into her island retreat.

Her wonderful team of staff are sourced from the local village and overseen by the loving and attentive eye of Santha, Maneesha’s mother. The team are not only quietly ever present to ensure that their guests want for absolutely nothing – they also produce dish after dish of delicious and organic Keralan food from the tiny kitchen space, always beautifully presented and always served with a beaming smile.

My boy and I fell in love with the unique concept of Kayal from the moment we arrived. Our days were passed with leisurely walks in the village (an entire loop around Kakkathuruthu island takes just one hour), or by idling on comfy sun loungers at the water’s edge watching life on the lake drift by. In the afternoons, we would settle down with homemade cookies and pots of chai in the little library pagoda, undisturbed, to read old National Geographic magazines.

The stillness of our surroundings always brought a peaceful nights’ sleep in our little bedroom, simply furnished and adorned with local photographs and artworks – and we awoke every morning to a steaming hot rain shower in our outdoor ‘garden bathroom.’ Ah, the calm and unhurried lifestyle of an island retreat.

With just four bedrooms at Kayal and the perfect amount of chill out space to accommodate every guest, we found that social interactions could be as fleeting or as engaging as we wanted them to be. I did however strike up a great friendship with fellow guest Prakash, the Executive Head Chef of a Keralan luxury spa resort, who’d escaped for a little getaway holiday of his own.

Early one gloriously sunny morning, we set off on a little adventure together with Kayal’s delightful manager Saiju to see the local fish auction. Small clusters of serious looking fishermen and buyers graciously made space for us around a silvery display of the day’s first catch, laid out on a piece of bright plastic tarpaulin. The ‘Fish Auctioneer’ enthusiastically took bids at the top of his voice, and although we didn’t have a clue what was going on, it was fun to see how it all rolled.

From there we went to visit the famous Chellanam Fishing Harbour, where endless row of gaily decorated boats and fluttering flags made me imagine what a pirate’s carnival might well look like. In all my twenty or so years of travelling around India, I have never seen such a riot of colour (which is truly saying something). When the fish bargaining began, it was as frenetic and unfathomable as the Indian Stock Exchange.

Yet despite the intensity of the market haggling, most of the fishing community paused when they spotted me to cheerfully ask where I was from. Travelling somewhere ‘off season’ mean you often find yourself the subject of friendly curiosity – and these good humoured exchanges at Chellanam Harbour were a heartwarming part of my memorable (and only) excursion off the island.

Later the same morning, we also got to see where our own Kayal canoe was created – in a little home-style workshop set amongst fields of corn just inland from the coast. There we met Mr Anthony, hard at work planing a nine metre long boat he’d just finished carving from local Punna wood. He told us he was the fourth generation of master craftsmen in his family, and as a boy apprentice to his father in this very same workshop, he had learnt how to skilfully stitch boats together with coir rope made from coconut husks. Such boats are a labour of love that serve Mr Anthony’s community well – a trade and a legacy to be proud of.

We returned home to the dreamy oasis of Kayal, happy and hungry for a traditional Keralan breakfast. Santha was there waiting to serve us at our lakeside dining table – fresh tropical fruit, puttu (little cylinders of steamed rice flour with coconut), spicy egg roast curry and of course that famous South Indian coffee so essential to early morning adventures. Heaven.

Our final day at Kayal sadly came around all too quickly, and our ever smiley boatman Vineesh took us for a magical cruise around the island at sunset. Cuckoos swooped and soared overhead as dusk began to fall, and one by one little lanterns began to flicker in every house along the shoreline. I don’t think I will ever forget the absolute peace and serenity I experienced on that evening – the feeling that there was nowhere else in the world I would rather be.

The next morning when we set off from the jetty for the last time, our luggage piled up high in the wooden boat we had grown so fond of, the friendly faces of Maneesha, Santha and Saiju were all there to wave us off. They knew we’d be back some day … and we will.

I was born to be a traveller, a restless soul excited to discover the treasures of the world, and so had never for one second contemplated where I might eventually retire to someday. However, my experience at Kayal definitely got me thinking about the kind of tranquil, nature filled paradise where I would be happy to live out my days, idling about in old wooden canoes and dancing in rain showers under huge starry skies. #takemetherekoko