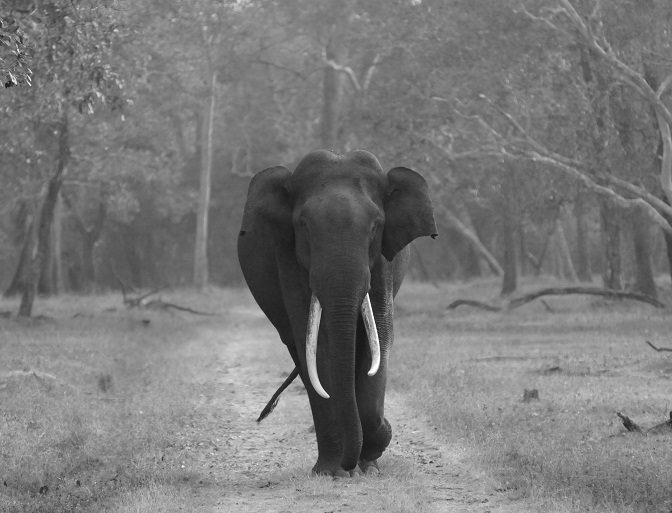 “If you are game – so are we” teased the Karnataka Wildlife Reserve brochure sitting on my desk. And as a result, I found I simply couldn’t stop thinking about a Family Safari Holiday. It was December, a month technically regarded as ‘off-season’ for Indian Wildlife Safaris. It was also very much ‘on-season’ for Goa, and all the Christmas madness that came with it. The idea of escaping to the lush forested countryside of Karnataka was as appealing as the wild elephant on the brochure cover. Not only that, but my little boy had begun to talk incessantly about elephants. How could I resist?

Happily justifying the trip as Family Safari Holiday research for KOKOindia Luxury Travels, within a few days we were winging our way from Goa to Bengaluru (Bangalore). From there, my son and I were all set to take a seven hour drive into the rural and tribal heartland of Mysore in Karnataka. The long journey can be easily broken up with an overnight stay in Mysore City, but taking the scenic route was to be an important part of our trip.

Karnataka is one India’s most bio-diverse regions, and the sheer beauty of the countryside certainly provided the wow factor. An arc of lushly forested hills provided the backdrop to scattered villages, waving fields of lilac sugarcane and herds of goats ambling home behind oxen-drawn carts. If Krishna had come skipping out of a field pursued by cow maidens, I wouldn’t have been at all surprised. The last twelve kilometres of bumpy dirt track were a little, um, challenging – but as the sun began to slip behind the Blue Mountains and wild hibiscus glowed around us like beacons in the dusk, it was truly magical.

Our destination was the Nagarhole National Park in Kabini – sixty four thousand hectares of pristine forest reserve with the glorious Kabini River winding through it. Once a popular hotspot for Viceroys and Royalty keen to hunt the rich wildlife of the Kabini Backwaters, the region is now one of India’s finest wildlife reserves. It is also the habitat for one of the largest congregations of Asiatic elephants in the world. Despite it being winter, I was optimistic we would spot one. Our cheerful driver Baloo certainly thought it was possible. “Madam has chosen very well! Plenty, plenty elephants in Kabini!” My four year old son could barely contain his excitement – although he was equally excited at the prospect of a) spotting an owl and b) spotting a dragon. In that order.

There are several highly rated resorts in the Kabini area, but I was in search of an altogether more personalised wildlife safari experience for guests of KOKOindia. The Bison Tented Camp is the only place to stay in the National Park that directly overlooks the forest. It was designed and built by the Jung family – the passionate wildlife enthusiasts and charming hosts who run the Camp all year round.  We were greeted upon our arrival by son Shaaz, who was thrilled that we’d made it during the last flutter of daylight – just in time to be shown around.

Only natural resources were used to create Bison so that the camp would blend in seamlessly with the forest, in accordance with India’s strict eco-tourism guidelines. A maximum of only ten African-styled tents, or ‘machaans’, also consciously limited the number of guests. We enjoyed a (very welcome) Welcome Drink in the cosy, colonial style lounge before being shown to our new living quarters. Simply yet elegantly furnished, our tent offered fabulous views from the huge king sized bed straight out onto the lake and forest. Even the bathroom offered luxury amidst the wilderness, with a bathtub, beaten copper sinks and handmade soap laid out carefully on fresh leaves.

Emerging after a hot rain shower into the cool night, we followed a lantern-lined walkway to the heart of the Camp where a roaring fire awaited. Spicy masala peanuts and crisp pakoras complemented an icy Gin and Tonic, and I settled down to listen to our hosts’ tales of recent leopard sightings and close calls. The stories spilled over into dinner, a buffet of delicious and authentic local dishes overseen by Chef Ajay. Happy and full, my little boy and I retired to bed to snuggle down with hot water bottles, roused only occasionally from a peaceful night’s sleep by the distant sound of firecrackers warning villagers of nocturnal predators.

Shaaz had various wonderful plans lined up for us over the next few days, and I was particularly intrigued by such exclusive activities as Bush Dinners in the forest and Guided Walks through the nearby tribal village. Bright and early on our first morning, we found ourselves skimming across the lake in a motorboat towards the village at the edge of the forest. Our local guide, Ramesh, helped us find our way through communal allotments of ginger, chillies, turmeric, lemon trees and sweet potatoes, to meet the villagers themselves.

Accustomed to odd looking strangers traipsing across their front yards, everyone greeted us with warm smiles and cries of ‘Namaskara.’ This was community life at its best, with neighbours taking nightly turns in the rickety watchtower to look out for elephants marauding amongst the ginger crops. Later we walked back through head-high fields of cotton, my son perched on Ramesh’s shoulders, to where our boat was waiting at the lakeside. The village kids splashed around in the water shouting out giggly farewells, under the watchful eye of their mothers beating out the washing on stone slabs.

Back at the Bison camp, we took a break between excursions and made the most of the relaxed atmosphere. Guests could enjoy a dip in the swimming pool, or hang out in the lounge to make use of the state-of-the-art telescopic equipment and the library of wildlife books. Unfortunately, the Bush Dinner that Shaaz had planned for us that evening couldn’t go ahead. There was high elephant activity between the sugarcane field and the forest, known as the ‘D-Line’. (How exciting!) In addition, the village was abuzz with the news that a cow had been killed by a leopard close to the camp, shielded by the tall sugarcane grass. Wildlife expeditions are inevitably unpredictable by their very nature, and so this news only served to heighten the thrill about what tomorrow might bring.

The next day’s Jeep Safari unsurprisingly turned out to be the real highlight of our trip. An exhilarating ride into the forest, with Shaaz as our expert Naturalist, began with some sound words of advice: “It’s not about what you see. It’s about listening to the forest.” His words were prophetic –within ten minutes, the jeep had ground to a halt not far from a stately looking Sambhar Deer which was emitting urgent warning cries. A leopard was clearly prowling the forest nearby. There had been two hundred and one leopard sightings at Nagarhole that year and so we were tense with excitement that we might see one. Alas, it was not meant to be. Despite waiting patiently, the responsive calls of a fellow Sambhar indicated that the leopard had moved on – the first of several such nail biting experiences.

A blissful few hours ensued as we meandered slowly through the forest in our jeep … listening, watching, waiting. High in the branches of a tree we saw a Giant Malabar Squirrel nibbling away at berries, and peacocks with rainbow tails of iridescent feathers constantly crisscrossed our path. We saw countless beautiful spotted deer and funny little mongeese scampering about – and then, forever imprinted on my memory, the first sighting of a herd of wild elephants.

The excitement was tangible. We watched in silence as two baby elephants waved their trunks around to mimic their parents, gigantic creatures deftly plucking leaves from the forest canopy above. Totally overawed by their overwhelming size and magnificence, no one said a word for a very long time … until my four year old broke the silence with a solemn announcement: “Elephants are mighty, aren’t they Mummy?” And everyone had to agree.

Eventually, the herd turned around and lumbered off into the forest, their long tufted tails waving farewell. We set off again, and a little further down the track encountered a pack of wild dogs with their ears pricked sharply. Ruby red parakeets trilled and swooped above their heads as we kept a keen watch.  And then as we rounded another corner, we suddenly spotted a second herd of elephants.

It felt almost too good to be true – but as we watched, one of the elephants seemed to get agitated by our presence. Before we could respectfully move on, however, we were privileged to bear witness to a very rare sight. One of the elephant’s began to calm its anxious mate by transferring specially secreted hormones into his mouth via her trunk. This seemed to do the trick – but we certainly didn’t stick around to see what happened next.

By this time the sunlight was slowly beginning to fade, and so the jeep set off for Camp once more. My son happily sat on Shaaz’s lap up front to share recollections of his first Safari experience. It turned out that he still remained hopeful of spotting an owl or a dragon before the day was through (which I must say Shaaz handled very diplomatically.) But then, way before our eagle-eyed Naturalist had a chance to notice it, my little boy exclaimed “A baby owl!” Sure enough, a tiny Spotted Owlet was perched up high up on a telegraph wire looking down at us – a sure sign that our adventure into the wilds of Karnataka was complete. My son and I will just have to save dragons for another day.- but you can contact Joanna@KOKOindia.com to design your own dream Indian wildlife safari with me.